Evaritus Lau
Blogs for gundam fans ~ Even though not that frequent updating, but will try my best to put my blog in better shape ~ ^^ Some of the my gunpla are built according from other sources such as Dengeki Hobby, Hobby Japan & other modeling sites. Feel free to leave comments on my blog, so that I could improve 'em. =)

Cut long story short, working in the new environment really kills the time to do blogging, all thanks to the simplify of Facebook. Anyway, I'm going to slow down on gunpla & headed to others instead; LBX.

At 1st, I'd admit, it's not that quite appealing in the beginning, because of the grunt unit is like....weirdo type, after awhile, yeah, started to get the heat. Not to mention there's alot of LBX is a monoeye type, being bad units. Ok, not going to rant more, I've post up the recent WIP I did on a LBX called Vector.

Well, Vector is by far, a very fresh look of unit I ever saw, those organic feels, ya know ?
To find out more about this unit, head to its wikia page. 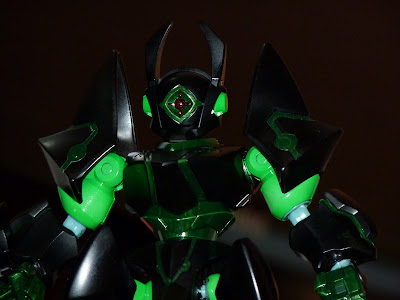 Hope I could test out install a LED into it's head, must be look awesome but the compartment is kinda small, had to think something similiar with the MCM Nightingale's LED unit.

Email ThisBlogThis!Share to TwitterShare to FacebookShare to Pinterest
Labels: LBX

Heh great to see you back! Thats a great looking LBX kit. I like the designs for LBX very interesting stuff.